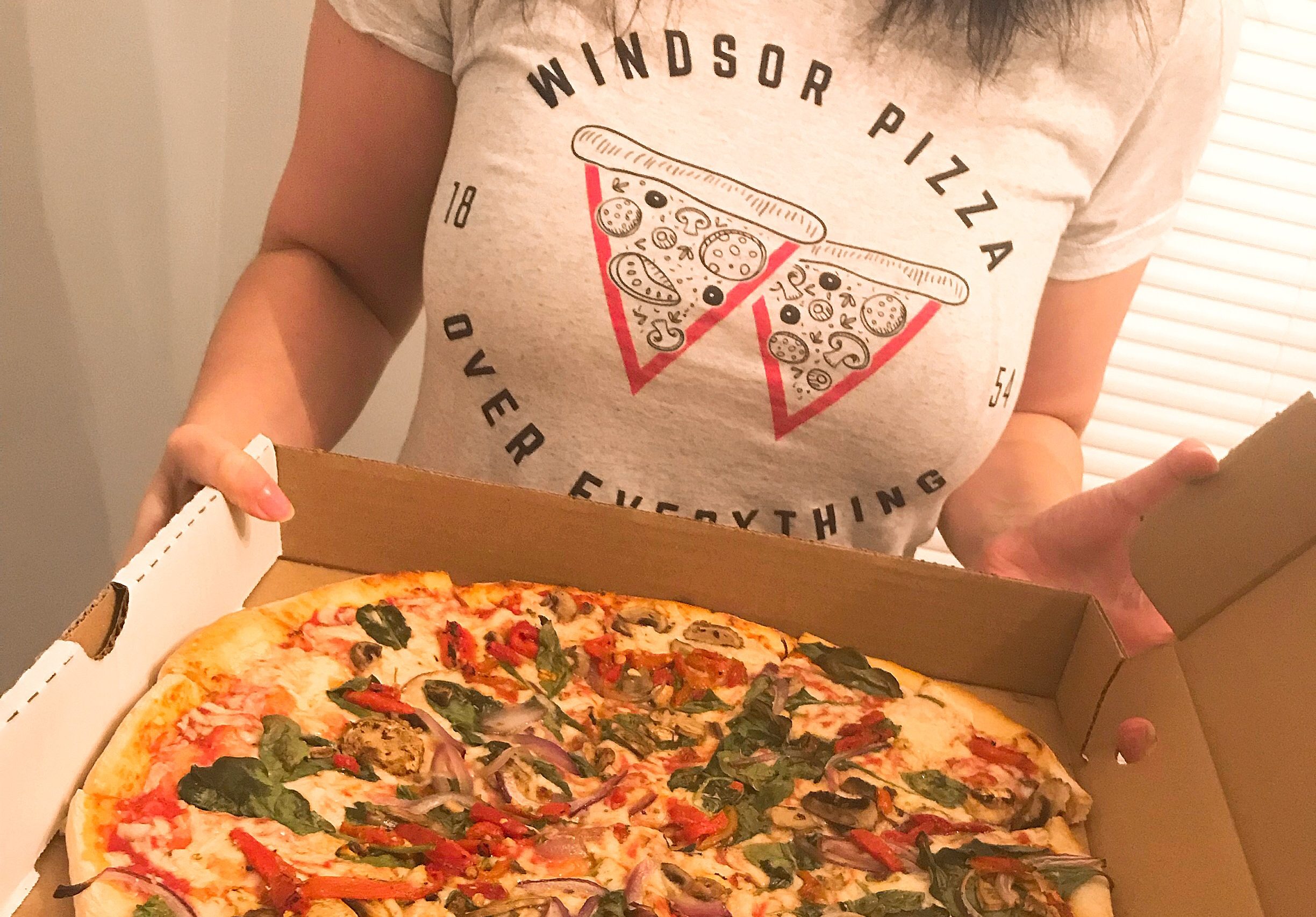 Pizza is my ultimate favorite food. I cannot get enough. I LOVE IT! And Windsor Ontario is one of the TOP destinations to travel too for pizza! Windsor is so well-known for their pizza that a former resident now living in Alberta opened a restaurant in Calgary called “Windsor Pizza”.

The pizza options in the city are so popular that a new blog entirely dedicated to Windsor pizza was started earlier this year. “Windsor Pizza Over Everything” shares their insights on various Windsor pizza staples and has also started a clothing line with t-shirts, sweaters and t-shirts that celebrates Windsor pizza in hopes of spreading the word even further.

Want to support the Windsor pizza scene? Head over to wpoe.ca and purchase an item and wear it around the city! I wear my everywhere and have been stopped at places like the grocery store, work and the gym from people excitingly asking where to purchase the apparel.

With so many fantastic options for pizza in Windsor-Essex, I wanted to help narrow down the list (which was incredibly difficult!) by spreading the word about some of my favorite spots.

Armandos – “Best Vegan Pizza”
Armandos has been my family’s go-to pizza spot for years. Recently, Armando’s has launched a wide-variety of gourmet vegan pizzas which are perfect options for dairy-free eaters and vegetarians. Keep in mind, the vegan pizzas are only available at the Cabana location in South Windsor. When it comes to the vegan options, my favourites are the Smokey Tofu BBQ and the Garden of Vegan. Big thank you goes out to “Professor Za” of the Cabana location for introducing me to the tasty vegan options. If vegan isn’t your slice, try the deep dish selections or my family favourite “A large pizza with cheese, pepperoni and fresh mushrooms”. 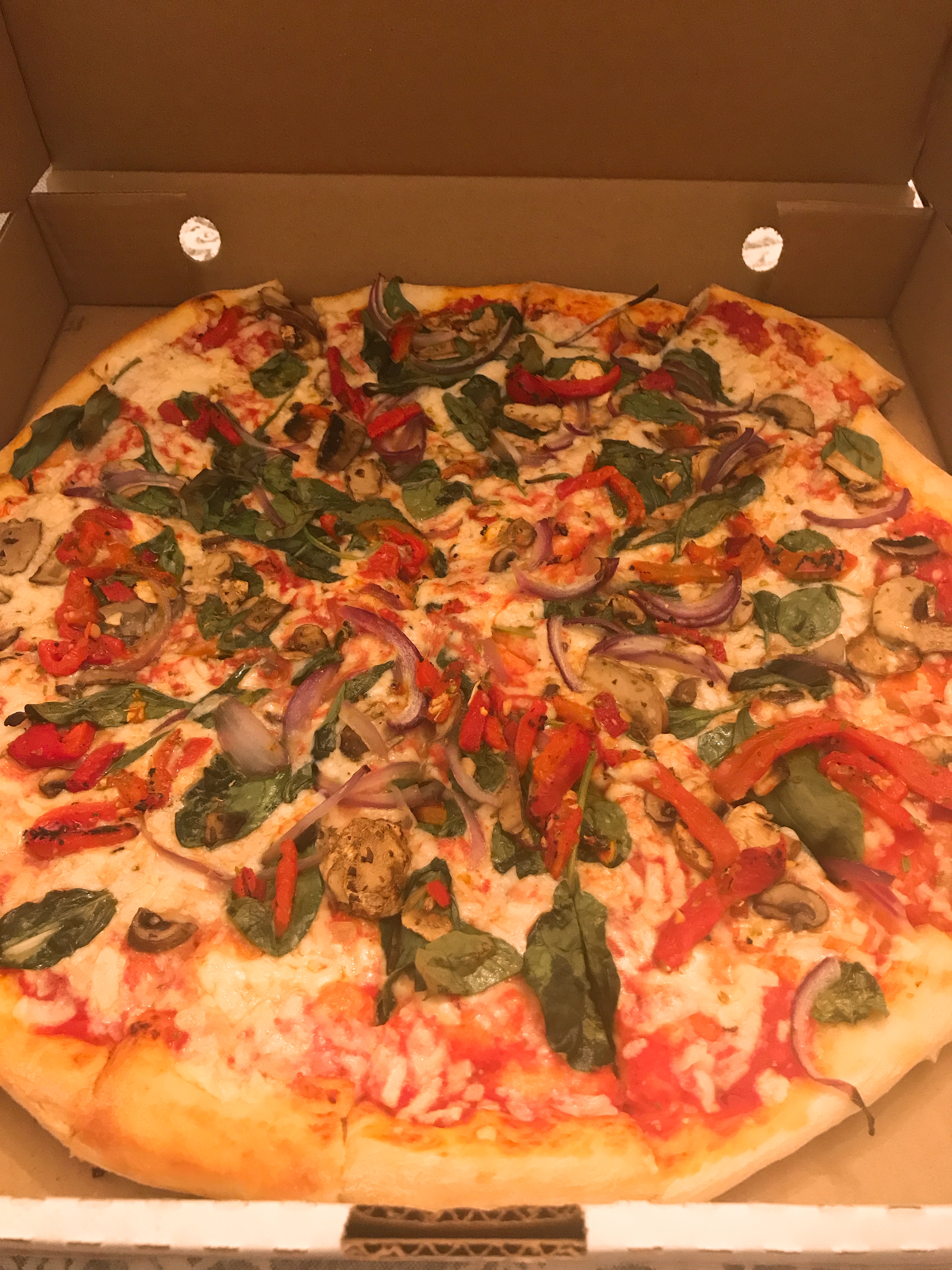 Caboto – “Windsor’s Classic”
Windsor’s #1 classic for family functions like birthday’s, anniversaries and celebrations. They offer many selections of wood-burning gourmet pizzas with a delicious side of homemade oil to place on top. Don’t forget to order a Nutella pizza for dessert along with an authentic cappuccino, it is to DIE for. The selection is so good that it’s nearly impossible to choose just one pizza – in that case, do what my family does, order 4-5 and share them with the entire table. 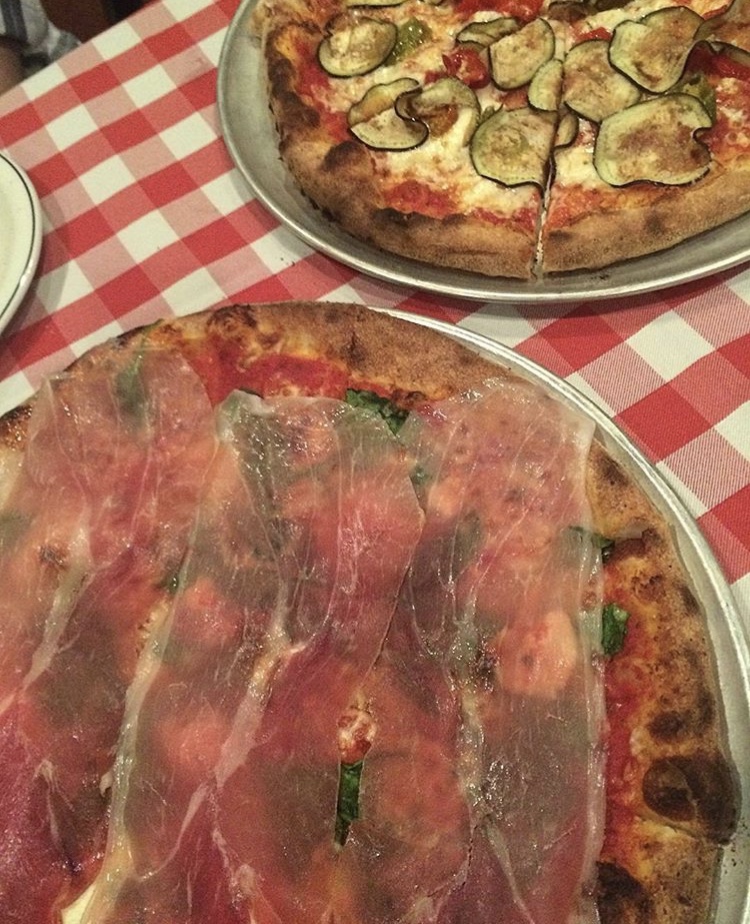 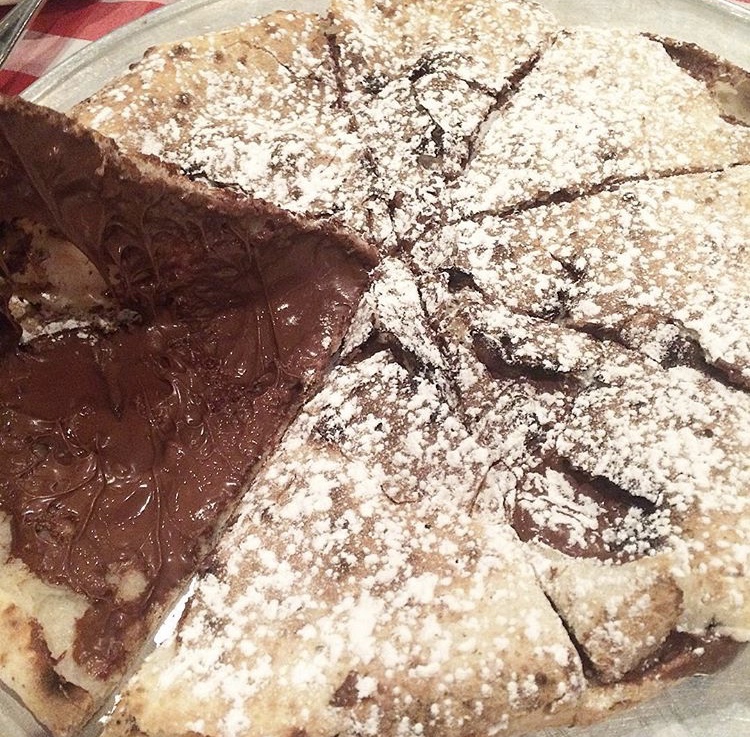 Cheese Wheelz – “Best Slice”
If you are ever craving a pizza at a random time during the day go to one of Cheese Wheelz 3 locations in Windsor-Essex County. They offer a thick or thin crust pizza with a wide variety of toppings which can be paired with stuffed bread balls and Greek gyro fries (my personal favorite). I sent famous Detroit foodie blogger “ChowDownDetroit” to Cheese Wheelz when he visited Windsor earlier this year and he couldn’t help but rave about it.

Antonino’s – “Cannolis on the Side”
Always aim for dessert after your pizza at Antonino’s and by dessert I mean throw a couple of their delicious cannolis on your order for a post pizza treat. Antoninio’s has been a family favorite for years and even though many new pizza places have popped up, we still count on the one that’s been around since “1959”.

The Bourbon – “Wood Burning Bliss”
Whether it’s for happy hour or chilling with friends on the weekend, The Bourbon is the perfect spot. Another of Windsor’s wood burning oven gems, Bourbon provides foodies like myself a ton of options. My personal favorites are the Magarita and Greek pizzas which taste even better when enjoyed on the Ottawa Street patio on a bright sunny day. 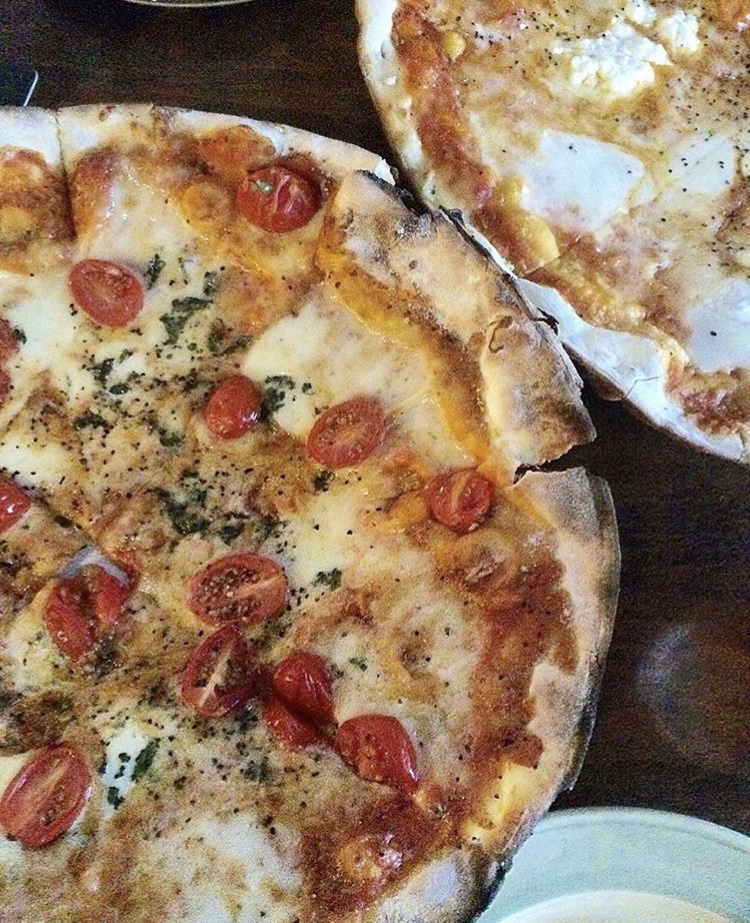 Arcata “The Chicken Shawarma Pizza”.
Since the Chicken shawarma is such a huge deal in Windsor, I was so excited to see Arcata add a Chicken Shawarma pizza to their menu. With a side of homemade garlic sauce, this combines two of Windsor’s most popular food choices all in one bite. 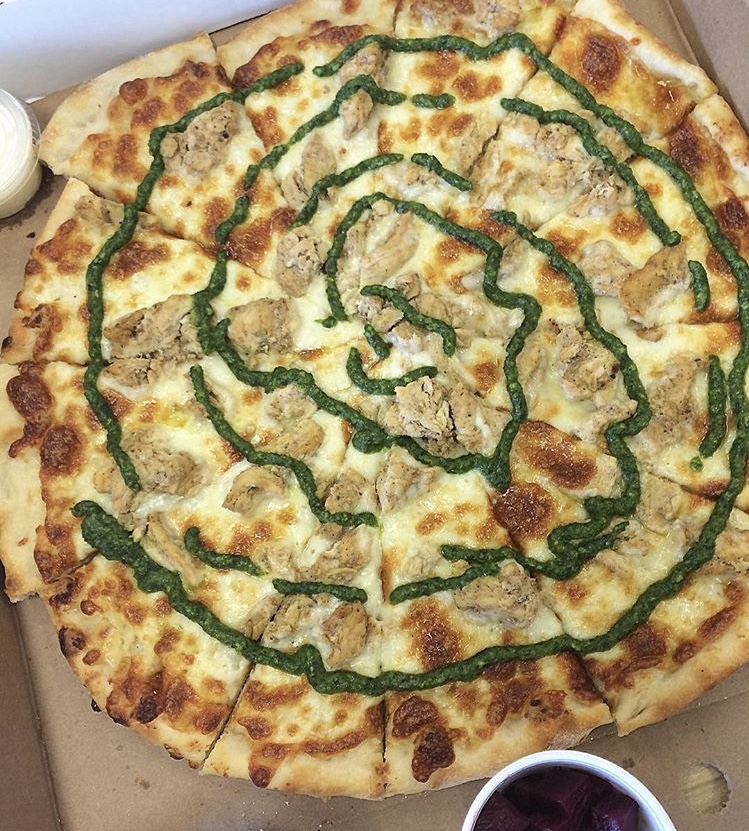 Wineology – “Wine N’ Pizza”
There’s really nothing better than sipping on a glass of red wine and enjoying a tasty pizza. I was very excited when Wineology opened in 2014 because I knew Windsor needed a place where me and my foodie friends could enjoy a fine glass of wine. While I do enjoy their wine flights, my favourite is the “JC’s Pizza”, I order it EVERY time I go to Wineology and have not tried any other kinds of pizza because “JC’s” is THAT good. There is such a distinct flavor (arugula, figs, prosciutto and goat cheese) that makes you want to savour every bite. 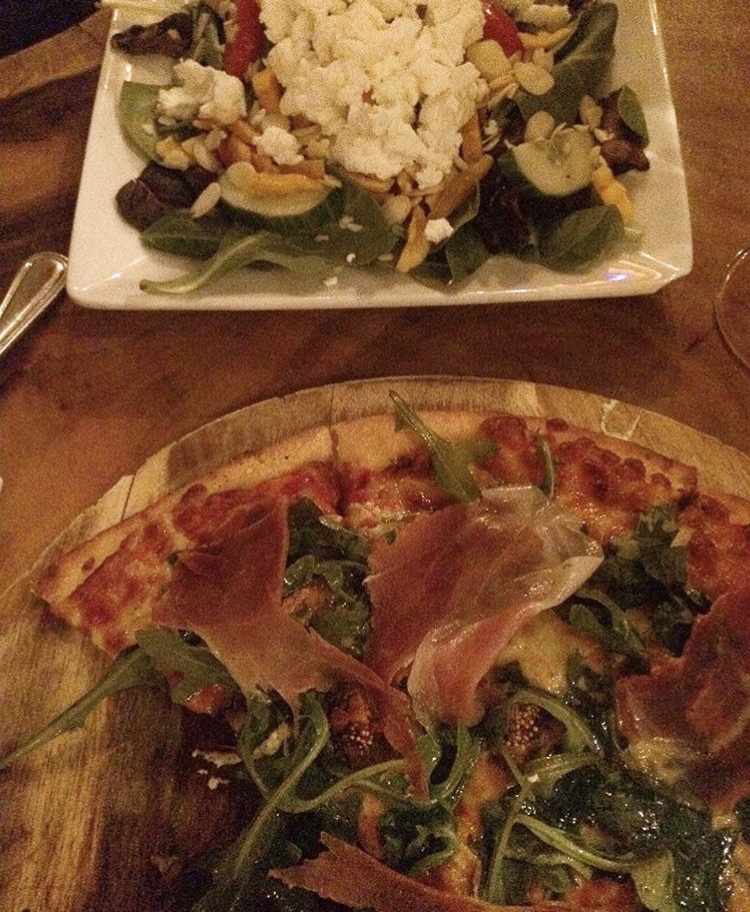 Downtown Pizza Co. – “The Sesame Crust”
The most unique pizza crust in the entire city comes to us courtesy of Downtown Pizza Co. They’re known for their sesame seed topping which they sprinkle on the crust of every one of their delicious pizzas. Also unique to their menu is their famous “white pizza” which is well-known by many in big cities like Toronto, Chicago and New York. Even though Pizza Co. just opened late last year it is quickly climbing my list of favorite pizza places in the city.

Terra Cotta – “Date Night Dining”
I was so happy the day I was introduced to Terra Cotta. It was right before a Windsor Film Festival show, ordered the Prosciutto and Fungi pizza. On the table in a red bottle was this magical homemade hot sauce that added the most flavourful touch to my pizza. If you’re looking for an intimate date night spot, look no further than this gem in downtown Windsor. 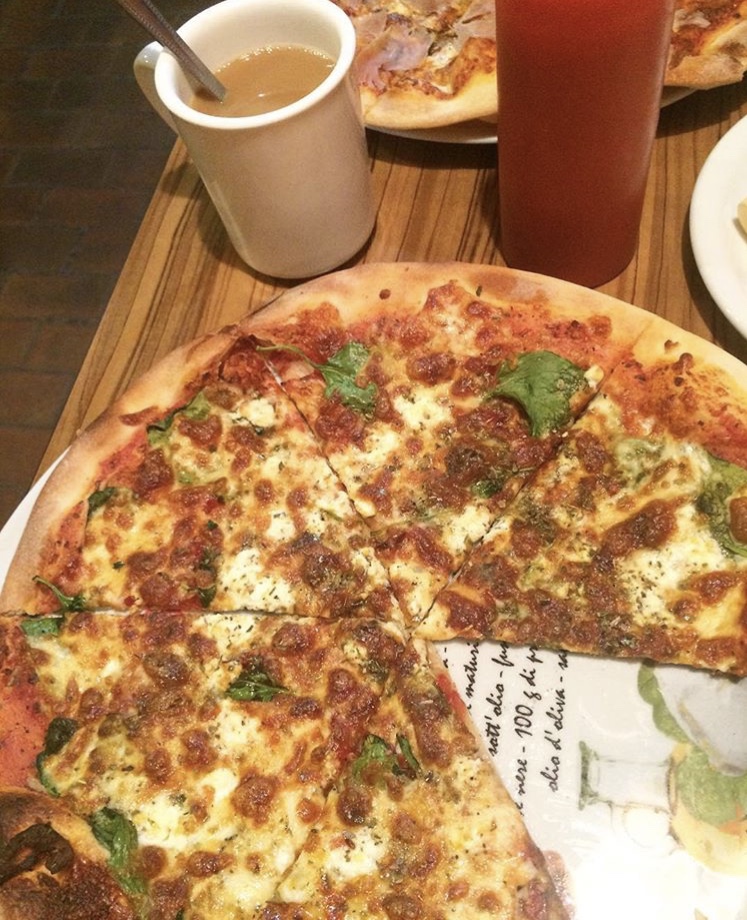 Oven 360 – “Design Your Own Pizza”
Windsor’s hottest new spot for pizza in the heart of South Windsor is Oven 360. Similar to creating your own sandwich at Subway, Oven 360 lets you create your own pizza in 3 quick steps. Start by choosing your size (7” or 14”), then pick your pizza base (eg. “Quatro Stagioni”, “Miranda”, “Remo” etc.) and then choose your own distinct toppings. Once you’re done your pizza, don’t forget to order a scoop (or 3) of their delicious homemade gelato. My personal favorite is the “Sicilian Cannoli”. 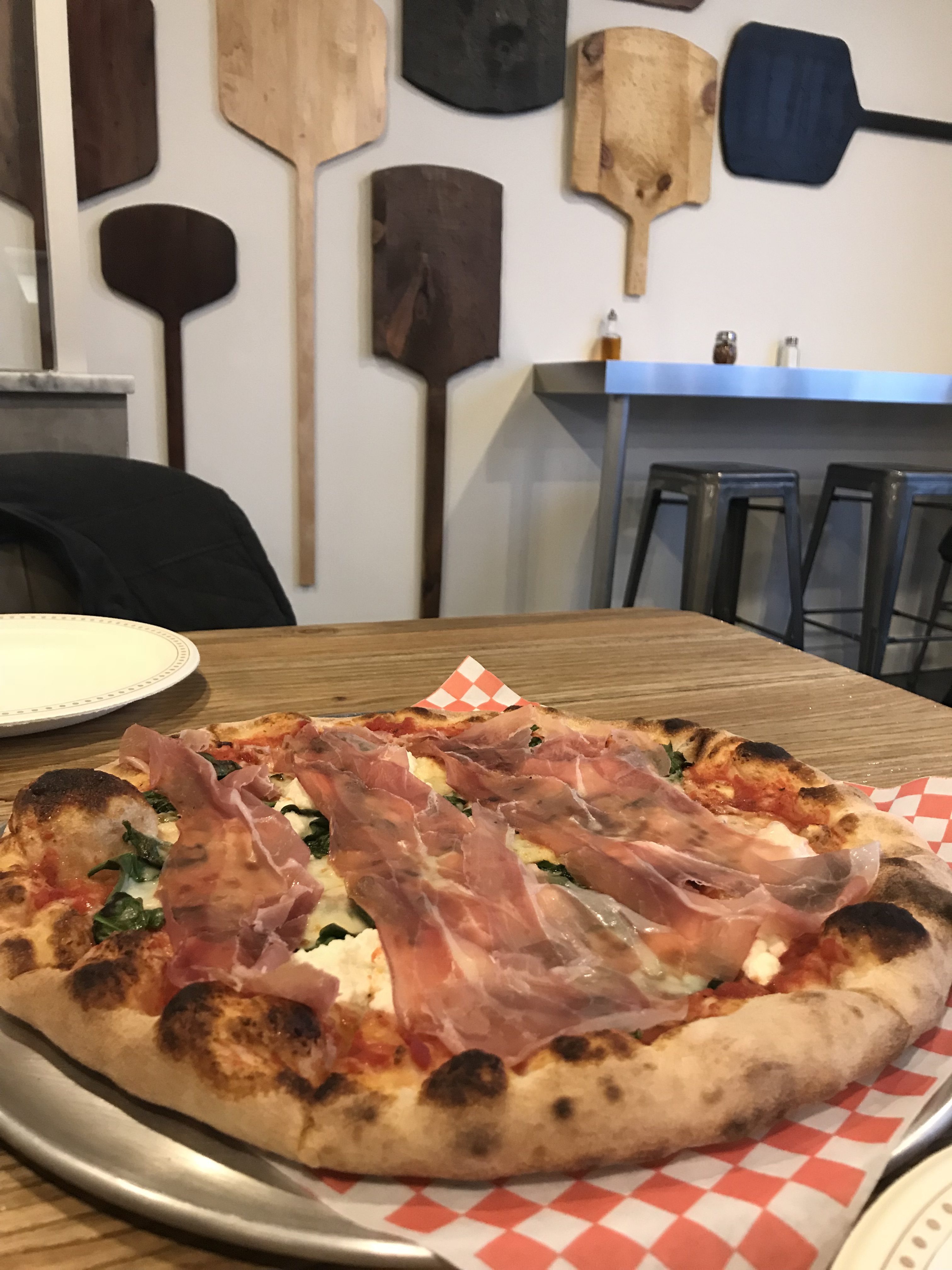 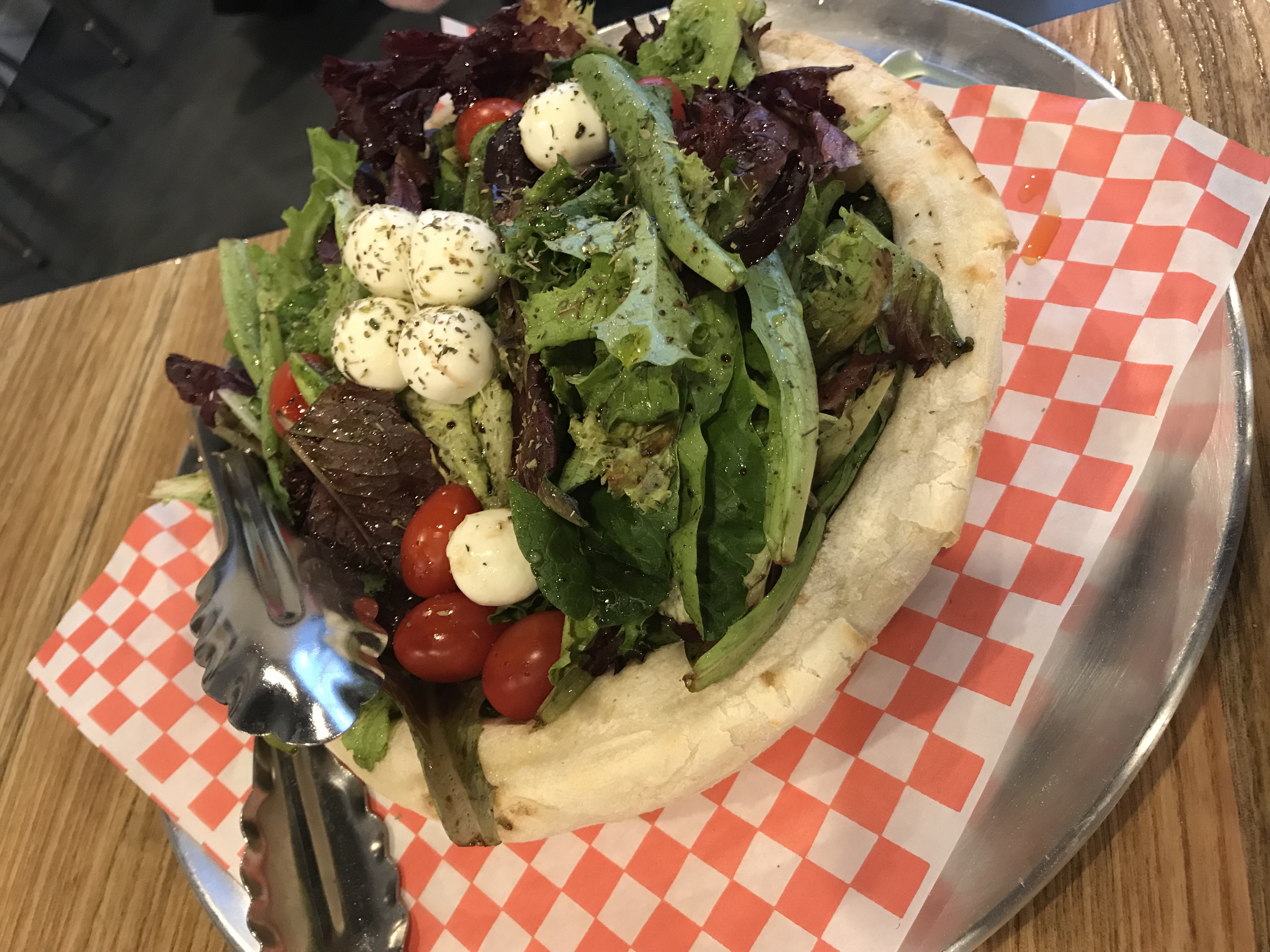 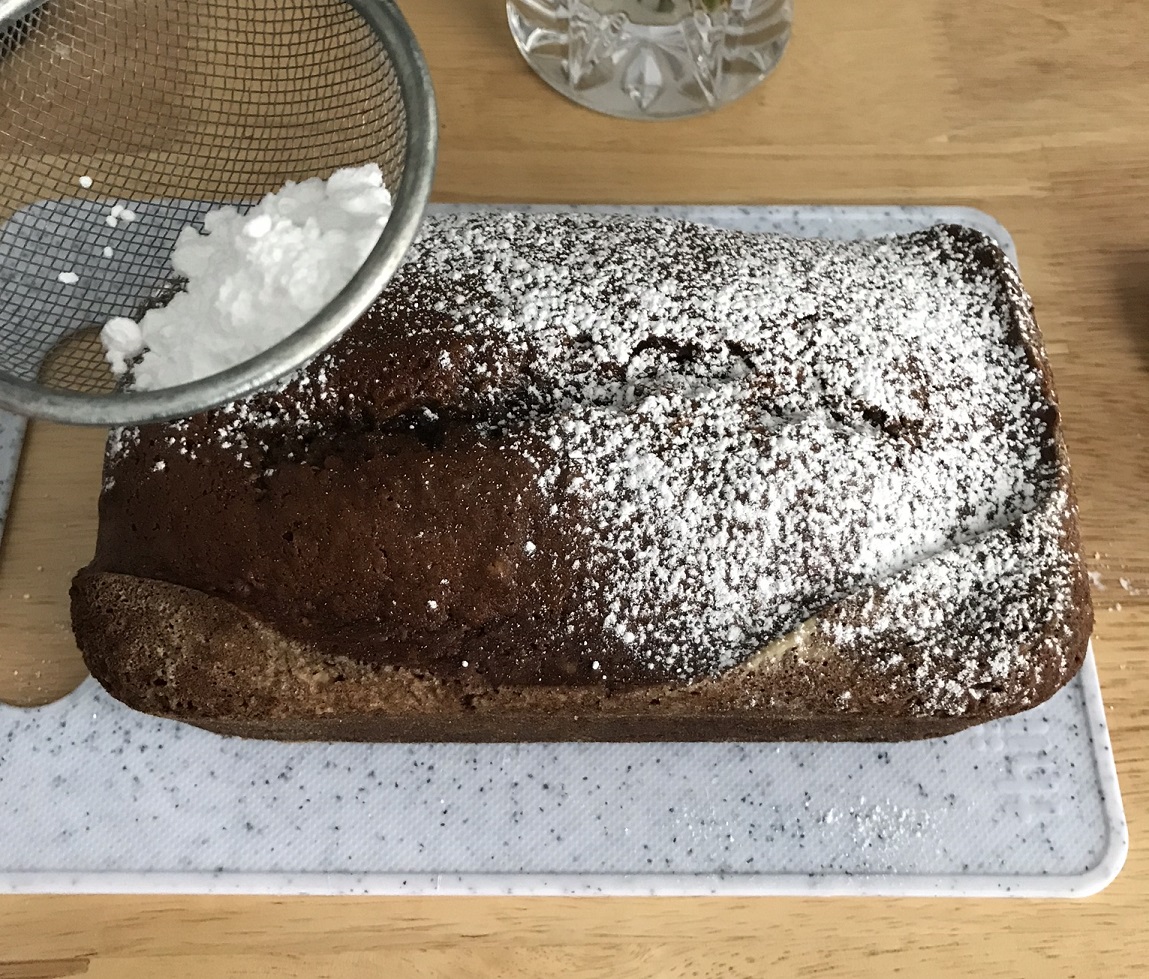 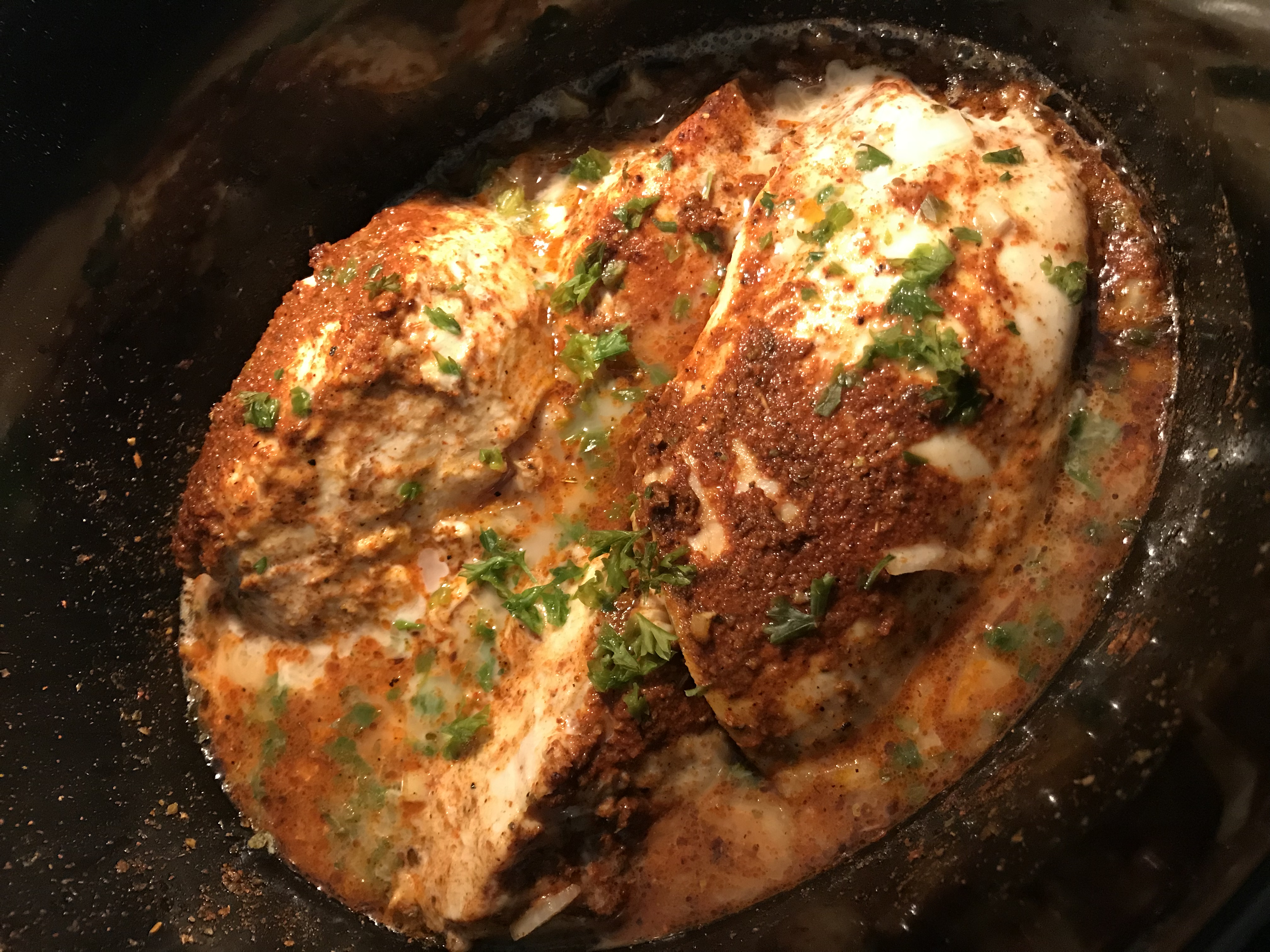 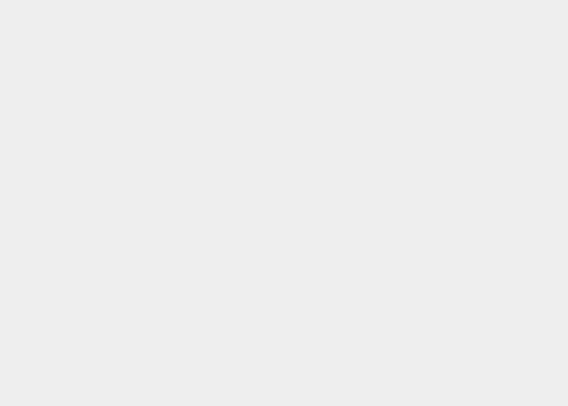